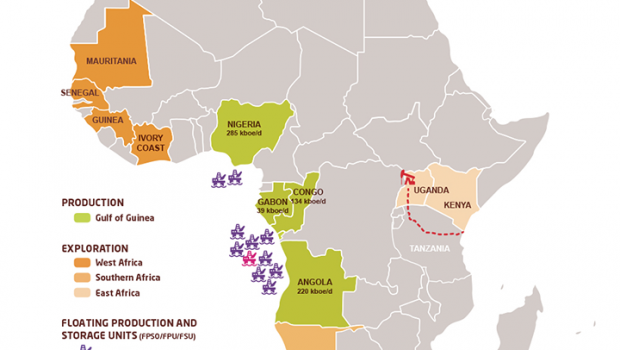 A new decade rich in promise for African oil & gas is dawning.

In no particular order, here are some of the industry stories that have caught our eye recently!

“Brulpadda was one of Total’s biggest exploration targets for 2019,” said Dr Andrew Latham, Vice President of Global Exploration at Wood Mackenzie. “Even though the well isn’t an oil discovery, if Brulpadda proves to be anywhere near as big as the estimates suggest, it will still be a game-changer for South Africa.” Such activity folds into a wider African gas narrative. Natural gas has been discovered in huge quantities in blocks around the continent, particularly in the Southeast, potentially powering Africa towards gas giant status.

While Brulpadda is a very important find, it’s currently Mozambique and its gas resources that are really powering African gas development.

A wave of US-based investment in development of the Southeast African nation is coming. The Export-Import Bank of the United States (EXIM) approved a $5bn loan to support the export of US goods and services for development and construction of an integrated LNG project in Mozambique in September 2019. This will supply the Mozambique LNG project, a one of a kind asset, developing resources in the gas-rich Rovuma basin.

Mozambique is seen as particularly low-risk for investors, as much of the end product has already been sold via contracts to buyers in Asia and Europe, effectively bank rolling the project.

ExxonMobil, alongside partners Eni, Korea Gas Corp, and CNPC, is also developing a $30bn LNG project to capitalise on Mozambique’s gas reserves. The project will have a capacity of more than 15m tons per year.

It sits alongside two other developments which are poised to turn Mozambique, one of the poorest nations on Earth, into a major gas supplier. The others include Anadarko’s, now Total’s, $25bn 13mpta facility, and an $8bn 3.4 FLNG platform spearheaded by Eni.

Estimates forecast that Mozambique can generate up to $95bn in revenues from gas production and exports by 2045. Not only will this spur on better economic performance for the country, it will also provide international majors with solid revenue and production streams into the next decade.

Occidental Petroleum closed its $38bn acquisition of Anadarko and its assets in August 2019, giving the company in-roads into Africa’s oil & gas industry.

As mentioned above, Anadarko was one of the key investors in developing Mozambique LNG, and Occidental, through its acquisition, has assumed this mantle. Or rather, it had, until it came to sell $8.8bn worth of African hydrocarbon assets to Total. This divestment effectively removes Occidental from some of Africa’s largest plays and prospects. Although negations are still ongoing regarding blocks, acreages, and resources previously owned by Anadarko in Algeria, Ghana, and South Africa, the Mozambique deal has closed.

Speaking of the deal, Occidental CEO Vicki Hillub said: “Given our long history of working together productively, I am confident we can execute this sale quickly and efficiently. Total has extensive experience working in Africa and is well positioned to maximise value from these assets.” Will this prove a major boon for Total? Certainly, it makes the French giant’s position in African much stronger, providing a massive geographical spread of key resources and projects throughout the region.

Since the discovery of the Zohr Gas Field, and an overhaul of appropriate hydrocarbons legislature, Egypt is rapidly positioning itself as North Africa’s major gas power.

Away from Zohr, however, there is more gas and hydrocarbons activity that makes Egypt attractive. For example, SDX Energy is pioneering its South Disouq gas project in the Nile Delta with further exploration work.

The firm announced in January 2020 that it had noted a 35% increase in reserves at the project site, which will add further importance to Egypt’s position in North African gas supplies. Ultimately, Egypt is aiming at becoming a major Mediterranean force in natural gas supplies, with sites on the Middle East and Europe as end markets.

Additionally, in the same month, the Egyptian Ministry of Petroleum and Mineral Resources announced discovery of a new field in the Western Desert. Found by Borg El-Arab Petroleum Company, this latest find’s production output is forecast at 7,000 barrels of oil per day, and 10m cubic metres of gas.

What’s more, the green light has been given for Shell, Chevron and Mubadala to begin exploration of offshore blocks within the Red Sea.

Egypt is likely to remain at the forefront of North African gas production from 2020 onwards, although it does have a regional Mediterranean rival in the shape of Israel to contend with.

Israel’s Leviathan play is appropriately named, and a rival for Zohr when it comes to reserves. That said, Egypt and Israel recently inked supply and export deals, so a harmonious future may be on the horizon.

As of May 2019, 168 newfield drilling operations throughout the basin, which covers an area roughly a third of the Gulf of Mexico, have revealed 9 BBOe. Over half the volume of discovered resources are in Senegalese blocks.

The expansive resources found in the Basin’s offshore acreages have drawn a mixture of international players to the region. For instance, Cairn Energy’s plays have revealed enormous quantities of oil, Kosmos’ activity discovered the largest offshore gas deposit in West Africa and so on. Total, BP, and ExxonMobil also have a strong presence here.

However, this area, rich in promise, is comparatively underexplored. Further activity is planned, both in developing existing fields, and discovering new opportunities. November 2019, for instance, saw Norwegian survey service firm TGS declare that it is to set up a 3D seismic survey to cover an area of 5,100 square kilometres to scope out further potential. Data will be available in Q4 2020.

Considering its potential, the MSGBC Basin will remain a major focus of exploration and analytical attention well into the next decade.